This month’s BareAll welcomed four inspiring speakers who shared how their business journeys have taken the everyday to a whole new level!

They told us about their motivation for doing what they do and the lessons they have learned along the way, from disrupting existing markets to overcoming huge personal challenges to create a more environmentally sustainable way of doing business.

Going with your gut

Jenny Costa, Rubies in the Rubble 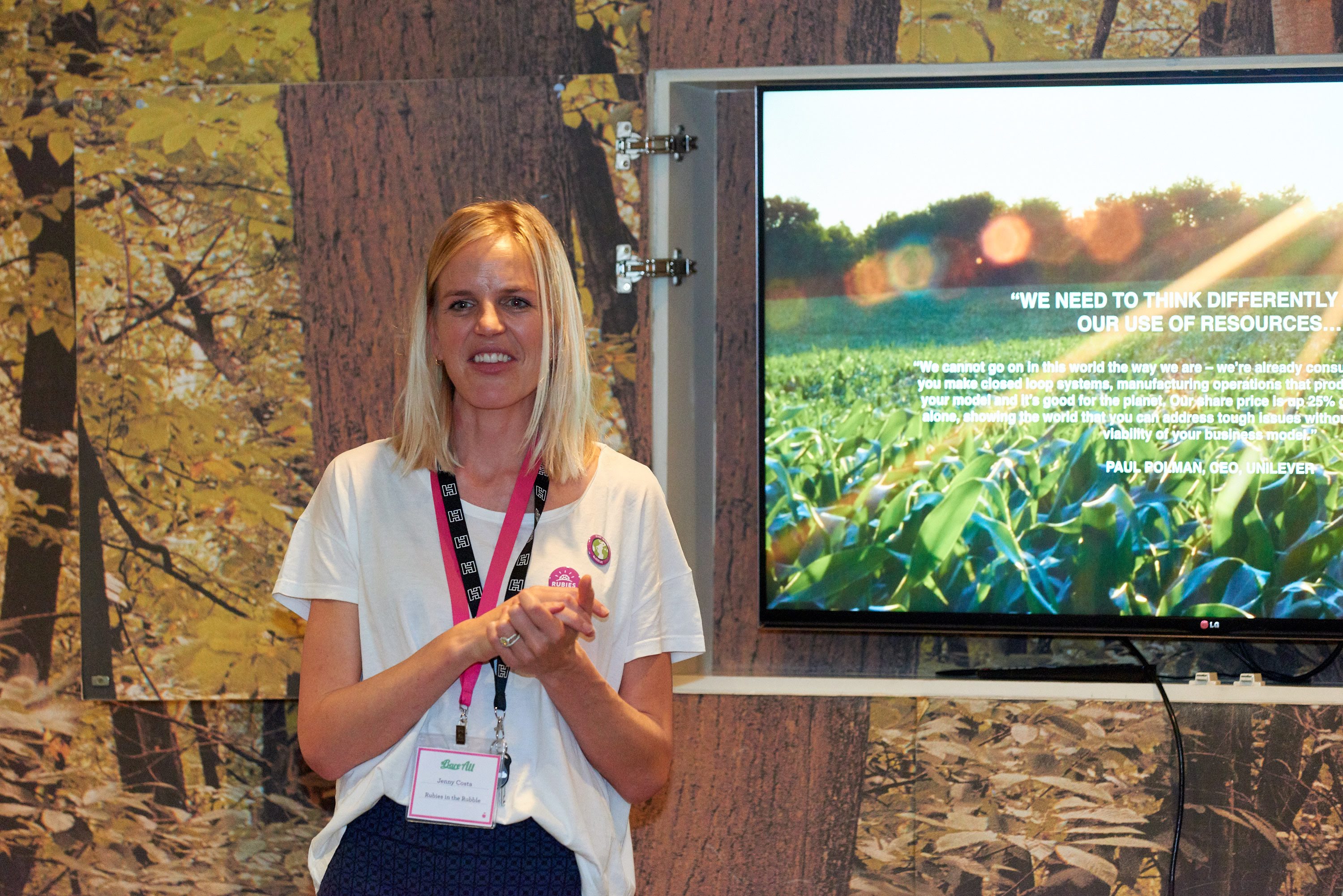 The best business ideas are the ones that find a simple solution to a complex problem, and Rubies in the Rubble have done just that. Taking good food that would otherwise go to waste and turning it into delicious chutneys and sauces has proven to be a recipe for success. Jenny’s love for delicious produce is evident in her products – we know, because we’ve tasted them!

Her inspiration came after learning about the shocking volume of fresh produce going to waste in UK supermarkets – if you haven’t heard about ‘bin divers’ then we suggest you google it! Jenny knew there was a better way to do business that could have a positive impact on the environment. As she explained:

Her first step was to get familiar with London’s vibrant produce markets, which she soon fell in love with. The sheer volume of good food being rejected was shocking, but she knew she could save it. Using it to cook up delicious chutneys with her mother’s old recipes to sell at market stalls, she couldn’t go wrong. Soon she had left her job in finance, and Rubies in the Rubble was born!

Jenny says that she has always been driven by her gut, learning as she went along. She clearly has good instincts! The business now has three production sites across the UK and works directly with farmers to obtain food that would otherwise go to waste. They sell their delicious products into food service, some of the top UK retailers and through their website. She shared some of her key learnings with us:

Rubies in the Rubble certainly know what they stand for and are always looking for ways to scale-up and reduce good food going to waste. The next step sees the introduction in a classic food staple into their product line – an artisan tomato ketchup to challenge the big players! Not only will this massively increase the number of tonnes of waste tomatoes they can use but will ensure that their products make it into the homes of more people in the UK. Rubies in the Rubble is a sustainable brand with a purpose, that’s why we love them! If you haven’t already tasted their products, go buy some. 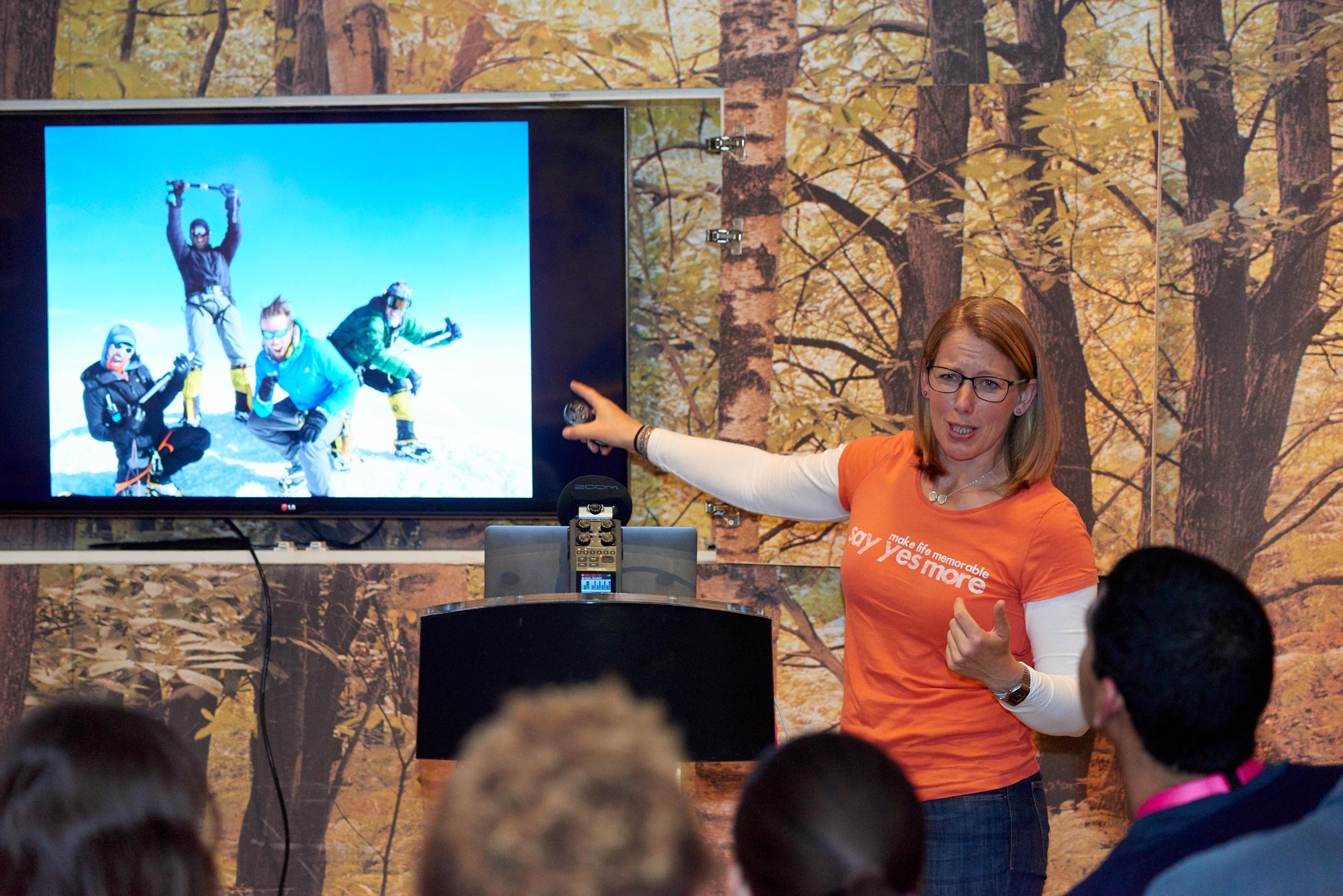 Sometimes life doesn’t turn out the way you expected it to. Jo’s journey from being a comfort-loving woman with vertigo, who has gone on to be 36th British woman to reach the summit of Everest and make a career out of being a freelance ‘adventurer’, is truly inspiring. As an ‘Outdoor Instructor and Expedition Leader’ she leads both charities and private clients on incredible adventures around the world. It’s fair to say that everyone in the room was gobsmacked by her story!

So, what happens to make someone’s life take such an unexpected turn?

Jo had planned out a dream life working with horses, but the reality wasn’t quite what she expected. A series of impressive careers followed, and she thought she’d stay in the safe and secure world of business advisory services until retirement… but there was something much more exciting around the corner! In 2004, Jo was persuaded to cycle 500km around Peru for Asthma UK. By 2007, she had moved 120 miles across the country to begin a new career running Open Challenges with Discover Adventure (DA). Then in 2010, she took the ultimate risk and launched her own freelance adventuring business. Now with 30 expeditions on Kilimanjaro along with numerous other expeditions on foot, 2 wheels and horseback, most at high altitude – it’s safe to say she has never looked back!

Jo found her passion through the support of others who encouraged her to say ‘YES!’ to new opportunities – even when they terrified her! Now she’s determined to support others. Not only do her expeditions raise much-needed money for charities, she also teaches and assesses the expedition element of the Duke of Edinburgh’s Award and has a busy public speaking schedule. The lessons that Jo has learned along the road can be applied to anyone’s life, and she shared some of them with us:

What’s next for Jo?

With only two left to conquer, she is now on route to complete the 7 Summits (climbing the highest mountain on each continent!) and continue to raise funds and awareness for children’s mental health charity Place2Be. Inspired to conquer your next challenge? Us too! 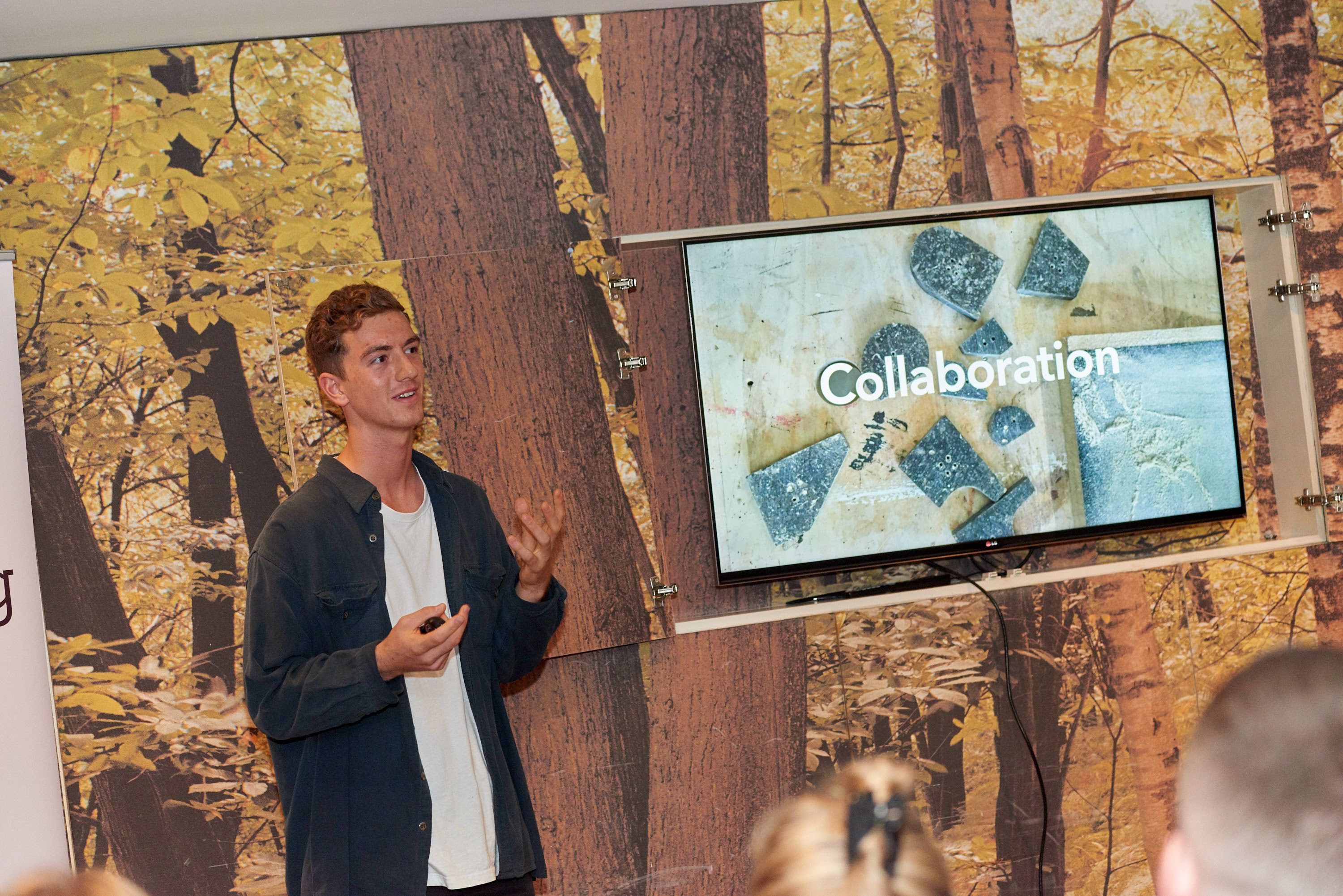 Sometimes you need to look at a problem from a different perspective; and when a plumber and a chef became friends while studying for a design degree, that is exactly what happened! Seeing an opportunity to do things differently, they formed Chip[s] Board, a material innovation company.

Amazingly, they’ve created an eco-friendly alternative to MDF, chipboard and acetate that just happens to be made from… potato waste. We think that’s pretty incredible!

Rowan and Rob’s inspiration came from building temporary displays for events, stage sets and shops. Materials needed to be cheap and disposable, so MDF was always the first choice. But this mass-produced material that doesn’t decompose and ends up in landfill once it’s finished with. It’s also dangerous to human health due to the toxins, such as deadly formaldehyde, used in the materials to bind it. MDF process creates a shocking 300,000 tonnes of waste in the UK alone each year. This was a problem that needed a solution, and they had an idea!

Chip[s] Board or CSB, provides a sustainable alternative to MDF that works in the same way – it’s strong, stable and easily painted. The amazing thing is that it’s completely renewable, sustainable and biodegradable. At the end of its life cycle, the products made from CSB can either be:

They have created a product that produces absolutely no waste! Their business disrupts the traditional ‘take, make, dispose of’ model with something that uses the same resources again and again.

McCain, a world-leading producer of potato food products with a commitment to sustainability, has collaborated with them to reuse their industrial potato waste. Other businesses are starting to express interest too.

So, what does the future hold for Chip[s] Board?

Their biggest challenge is to start changing perceptions and make biomaterials the norm, and the key to this is collaboration with other designers and material innovators. They’re also working on finding a colour pigment from other waste materials to create a range of colour options to cater to different industries.

In the immediate future, scaling-up production to meet the needs of new industries is a key priority. Some potential new opportunities include:

The world of biomaterials is growing fast, and with the likes of Dell and HP using mycelium (a type of mushroom fungus!) to produce decomposable packaging, it is only going to get bigger. The potential for Chip[s] Board to make an impact is huge.

Feeling inspired? If you’d like to attend – or speak – at the next BareAll event, get in touch!