The Giant Peach High Growth Collective come together to hear inspirational business leaders talk about their experiences and share insights from their journey to inspire others to reach their business goals. September’s collective gathered to hear three great speakers talk about pivotal moments and trusting their instincts. 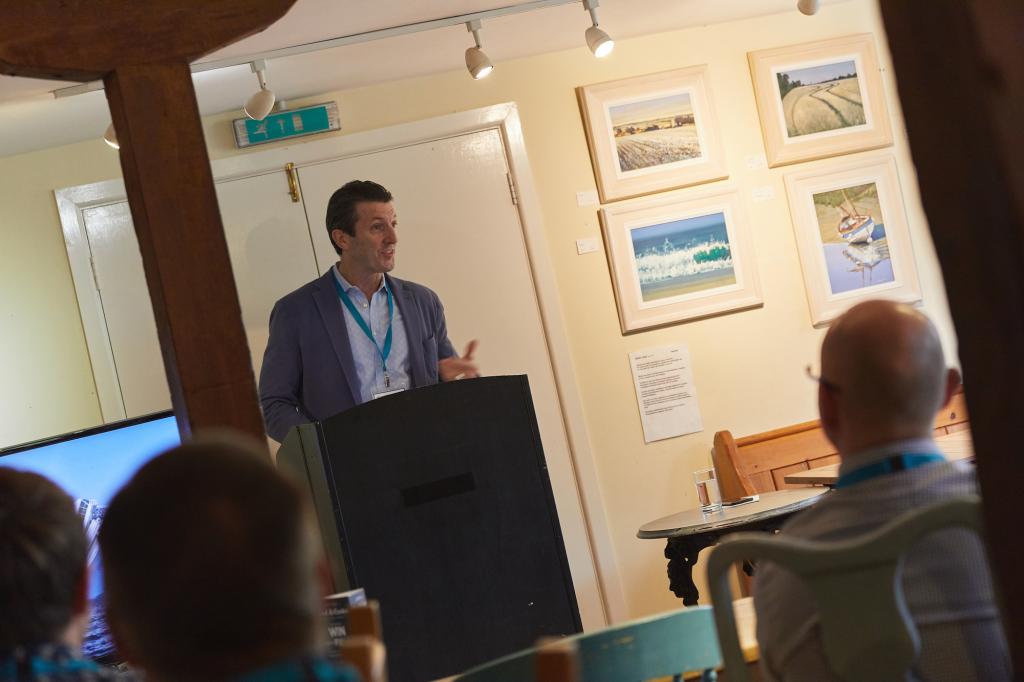 It’s fair to say John’s no slouch. He’s the Authentic Entrepreneur, co-founder of both New Covent Garden Soup Co. and toddler food brand Little Dish. He actively manages an investor/Non-Executive Director portfolio and gives business growth advice, guidance and mentoring to business owners. John’s 30 years experience has lent him some universal truths and lucky for us he’s in the business of sharing them.

Forget conventional wisdom
When John set up the New Covent Garden Soup Co. with Andrew Palmer people told them they were crazy. Supermarkets saw it as a risk and thought they’d poison people (to their knowledge they haven’t killed anyone yet). Over and over they were told retailers wouldn’t buy into it and consumers wouldn’t pay for it. John calls this attitude ‘conventional wisdom’.

The pushback they encountered made them even more determined. John believed people pay good money for good products and he trusted their product and their plan. He was right. John learnt not to put faith in conventional wisdom and to have the courage of your convictions.

The Benefit of Adversity & The Power of Failure
The power of failure is in the planning and executing your next success. John says his US business closing down was the biggest knockback of his career. He thought he was a failure. It was a tough time but it ultimately led to a period of re-adjustment. He set out to prove he could do it again and Little Dish was created.

John believes his ‘failure’ made him stronger. He says ‘Don’t be a victim and don’t take knocks personally. Adversity is a part of life.’

The Power of Authenticity
John got through his ups and downs by remaining true to his values and core beliefs. For all entrepreneurs and businesses he recommends finding your authentic self and being true to it: leverage your individuality to give you a uniqueness that attracts the right audiences and keeps you focused. Embrace who you are.

Keep Calm & Trust Yourself
This isn’t an easy one, but it’s worth it. You need to be comfortable in your own skin and recognise the strengths of your personality. Pretending to be something you’re not, or copying someone else is exhausting and inauthentic and your customers will sense it. Trust yourself and your idea and others will follow.

Is Virtual Reality a growth engine for business?
James Read 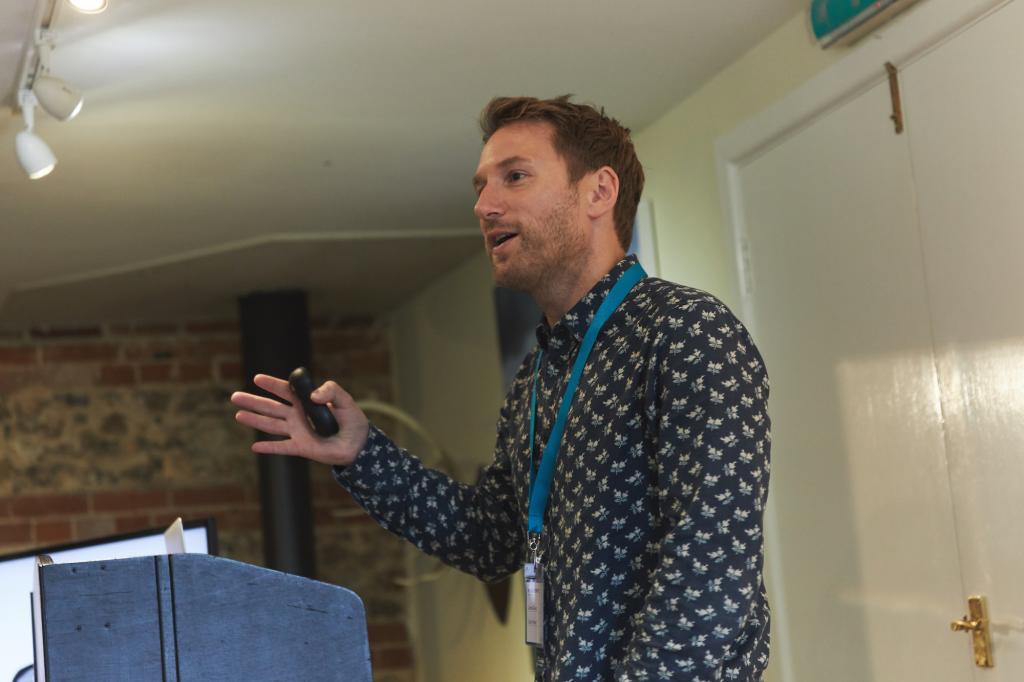 Our fearless leader James was next to the floor to talk about the disruptive nature of virtual reality. VR seems like a futuristic leap for the every day business but James believes early adoption of the tech will buoy businesses and lead them to growth.

Says James, ‘About a year ago I put a simple cardboard headset on, dropped my phone into the front and was transported to a beach, to a boat, underwater. I was blown away. I realised how important and immediate this technology is. It’s out of the development phase, it’s tangible, and it’s something we can all get our hands on right now. Nothing compares to it and the best part is – it can be anything you want it to be.’

VR, what you need to know:

Customer Experience (CX) is how brands differentiate themselves in 2017/18 – creating immersive experiences and breaking down the barriers between company and customer. With your online presence you’re forging as human a connection as you possibly can with words, images and design. Imagine taking CX that step further and creating a connection between the virtual and real world.

Some companies are really pushing the envelope, like Project Nourished with their multisensory eating experience or Teslasuit with a full-body ‘smart clothing’ offering. But there are other, more accessible ways of using VR as CX right now: Coolhobo allows customers to choose a wine by transporting them to vineyards in France, showing you how they grow it, then take you to a wine shop where you can get the wine.

James has been invited to speak about VR and harnessing it for growth at various events across the country, read his blog here, follow us to keep up with where he’ll be, or arrange a chat to see how VR could benefit your business.

Everest & The Earthquake: a story of challenge and resilience
Jo Bradshaw 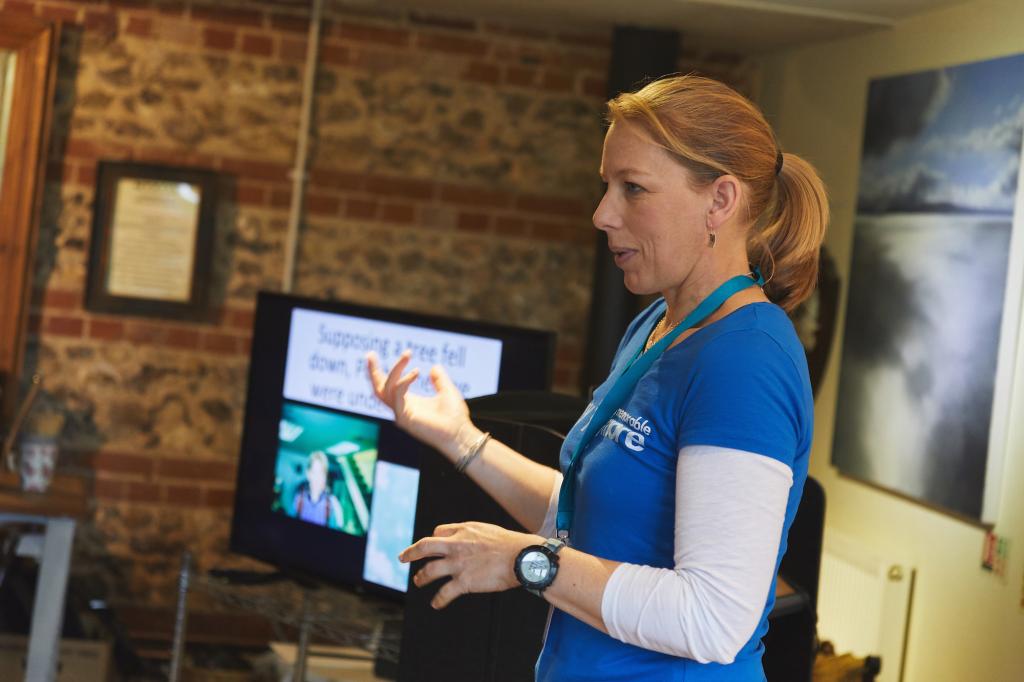 For a very long time ‘adventure’ was not on Jo Bradshaw’s radar. Working in business management and risk-averse, she liked her home comforts and didn’t go out much. But saying ‘yes’ just the once and defying her own convention changed Jo’s life forever.

Her story is one of change and challenge. In her early 30s (when ‘never’ used to appear a lot in her vocabulary), she decided to say yes to a parachute jump with a friend. The jump blew her mind and she started to question her fears.

A few weeks later a flyer dropped on her mat for a bike ride in Peru. Jo dismissed it at first – it was in Peru (where even was that?), it was wild camping (no way) but something made her mention it to her parachute buddy, who insisted they do it. So they did.

On their return, when Jo discovered a friend had been diagnosed with leukaemia, she was determined to fundraise and found an event via Discover Adventure. Once again she got on her bike and faced her fear for a good cause. She was so inspired that she started helping at Discover Adventure events in her spare time and developed such a love and dedication for the company that she was asked to work for them.

Jo’s journey continued through the Andes on horseback, working as a guide at the Duke of Edinburgh, climbing Kilimanjaro and the Mera Peak – and every time coaching herself to say ‘Yes’.

It was this ability to challenge herself that led her to climb Everest and its neighbouring summit, Lhotse. The expedition was not plain sailing. Along the way Jo picked up a chest infection, broke her finger, and her guide lost his bag. They thought that was probably all the bad luck they were in for…

It was during their first day at Camp 1, above the Khumbu Icefall, just as they were sorting their tent, when the earthquake hit. The glacier beneath Jo ‘just went’ and an avalanche started to come towards them. They had nowhere to go – it was into the avalanche or into the crevasses, they sheltered behind their tent and amazingly survived. They were rescued two days later and returned to Basecamp, which was completely devastated.

Despite the traumatic experience she was determined to go back and raise money for those affected by the earthquake and on the 19th May 2016 at 06.45 they got to the summit. Jo thought ‘Yeah we’ve done it!’ But the joy was short-lived because they still had to get the next summit!  Jo’s previous self would have been negative and disheartened and scared, but she challenged her status quo and turned her negativity around. She says ‘I used to be Piglet but now I’m Pooh. Now I say yes more.’

Jo’s ongoing challenge is the Seven Summits – the highest peaks of each continent – while she promotes the children’s mental health charity Place2Be. Jo compares her life to a series of pictures – developing the good times and learning from the negatives. She’s achieved incredible feats despite her fear and it all started with just one ‘yes’.