Well, another month, another incredible Giant Peach BareAll event – raising the bar yet again with a glut of inspirational speakers and thought leaders in the eco arena. This month we look at 4 massively successful pioneers harnessing everyday rituals (eating, beauty, fashion and media) for the betterment of our planet. 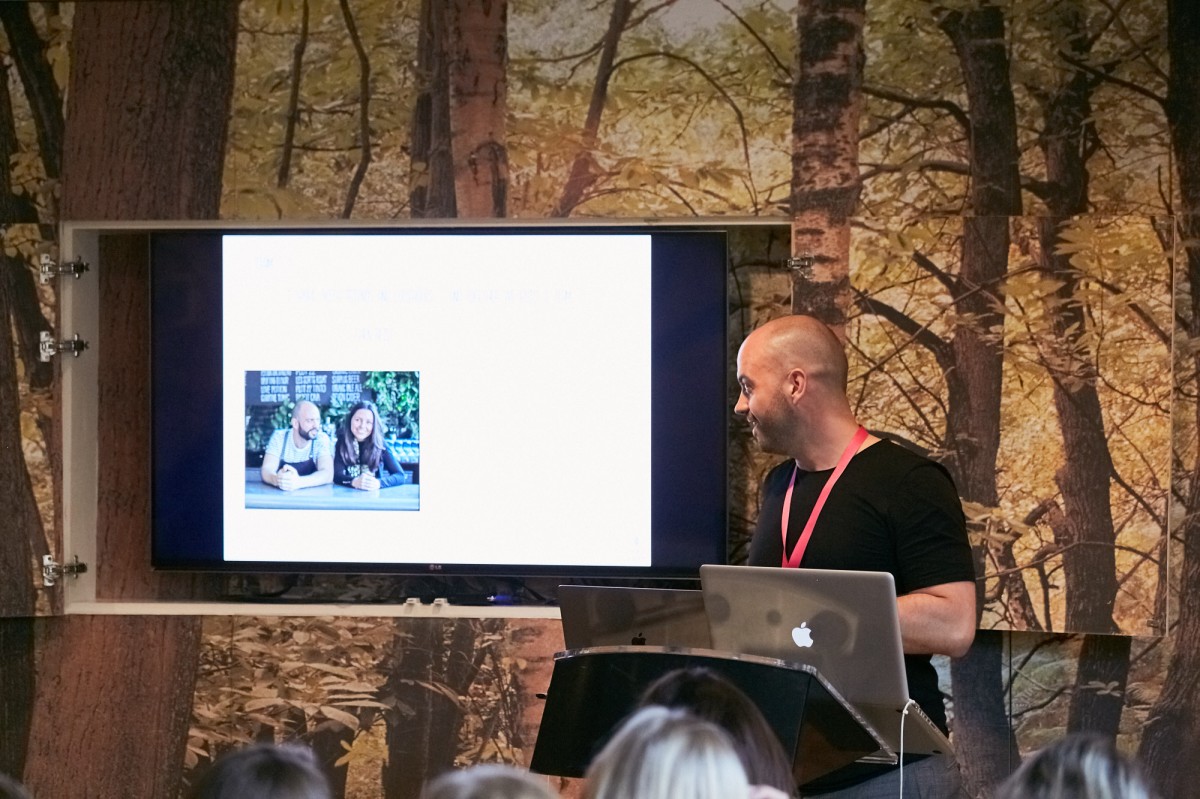 According to Wrap, the UK wastes 15 million tonnes of food a year; 4.3 tonnes of which is generated by the hospitality, retail and public sector. The cost of this waste to the UK economy is £17 billion a year, yet the majority of food thrown away is edible. This waste has a huge effect on the environment, producing mostly methane, the most dangerous of the greenhouse gases.

Having worked as a chef for 10 years, witnessing the waste at first hand, Justin Horne knew something had to change but what – and how he could be involved – wasn’t clear yet…

Lost in the desert
In late 2015 Justin spent 10 days in the desert working on a pop-up restaurant/hotel project. There he met like-minded people and realised, with common consciousness and belief in sustainability, making a difference happens collectively. Justin decided to set up his own, totally sustainable restaurant.

Following the restaurant supply chain back to the bottlenecks, Justin found that, in meeting strict specifications for the appearance of a product, farms were creating incredible amounts of waste in selling to supermarkets. To bypass the unnecessary stipulations, he set up direct partnerships with farmers, wholesalers and retailers, assembled his team and lo! Tiny Leaf was borne unto the world.

The Tiny Leaf mission is to run organic, vegetarian, zero waste restaurants with the aim to get people thinking about the provenance of the food they eat every day and how that impacts the planet.

Educating, inspiring and delicious; the mix of strong values and incredible menu ensures Tiny Leaf is a resounding global success with people flying from all over to see what was going on. Justin’s next step is to build a circular economy restaurant, producing its own energy, growing its own produce and bringing the community together to educate people in the ways of profitable waste. Watch this space! 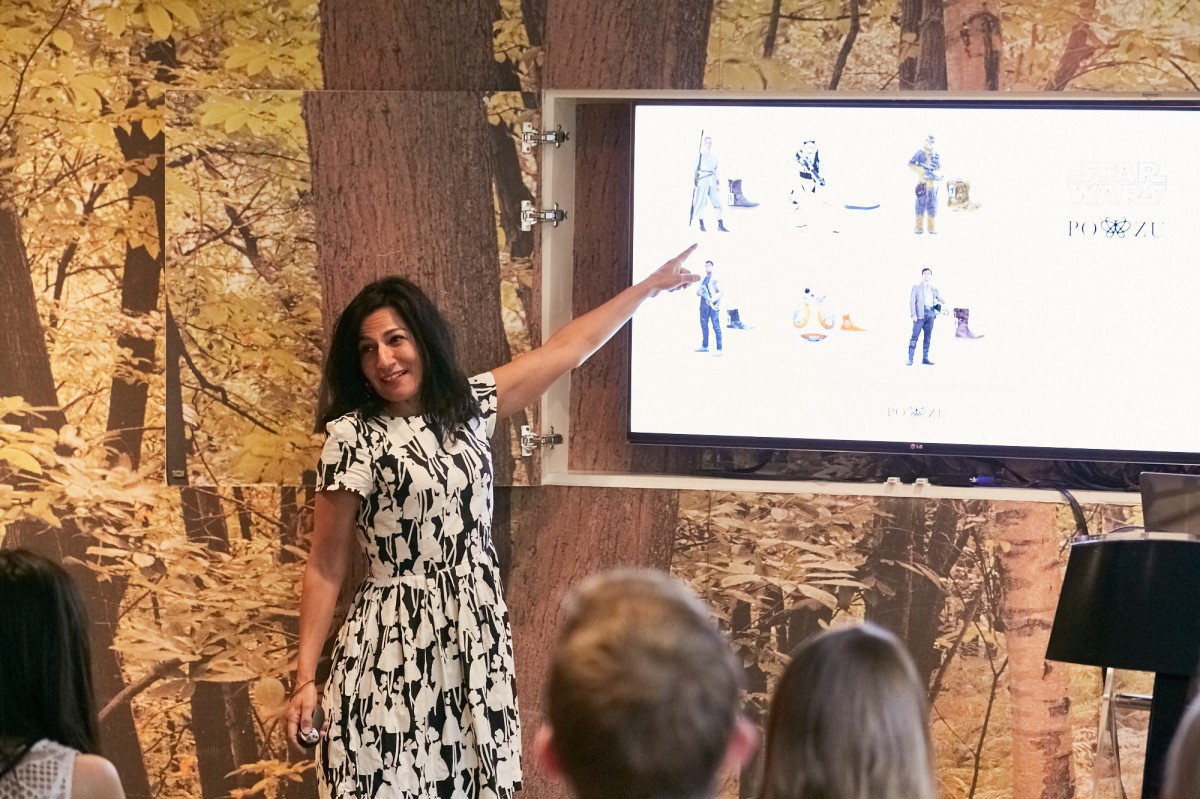 Safia stood before us wearing head to foot ethical and organic, proving that eco fashion is both do-able and on-trend. She opened her talk with a clip of the incredibly moving True Cost, a documentary about the fashion industry’s impact on the world. An eye-opener and one to watch, the room was stunned into silence and ready to hear more about ‘being the change’.

Safia founded People Tree 25 years ago in Japan because she wanted to be sure every pound she spent on clothing was respectful to people and the planet. Through People Tree she developed the first supply chains for Fair Trade fashion, getting into slums in Bangladesh, India, Nepal, Africa and Latin America and making clear what fashion needs to be fair about.

The fashion industry has a high human cost and its connection to environmental degradation is absolutely huge but, because of its massive reach, it also has an opportunity to empower significant change:

Taking it to the world
Safia knew there was appetite for ethical fashion alternatives and when Vogue Japan suggested People Tree collaborate with the world’s most important designers, she showed that incredible, sophisticated fashion garments could be tailored from materials hand-woven in villages. Since then collaboration is somewhat of a theme for People Tree, with the world’s fashion visionaries getting involved in making a difference.

Po-Zu
Finding a gap in the market for some great-looking eco footwear, Safia teamed up with Po-Zu to design shoes. Po-Zu was set up in 2006 by Sven Segal, an award-winning entrepreneur and shoe designer. After working for mainstream shoe brands for 10 years, he was overwhelmed by the unethical practices (not to mention the toxic glue fumes). So he set up shop with a whole new shoe design, using only sustainable practices and materials.

Once again collaboration plays a key role, working with big brands like Timberland to create eco friendly ranges. Their most recent collab is with a film franchise you may have heard of, Star Wars. The Star Wars range represent the characters (wookie boots anyone?), but many were actually worn in the movie too – taking eco fashion to the big screen.

Books
Between People Tree and Po-Zu, never missing a beat, Safia published Slow Fashion, a book about the ethical fashion movement. Last month she brought out her newest title, Slave to Fashion, a look into modern slavery in the garment industry – giving slavery a human face. These books are shaking things up – getting people involved and making the world take notice.

Safia’s closing thought was one of collaboration. As social entrepreneurs, the one thing we must do is prove our model works and continue to carry the banner for change. By showing there’s another way, we can mobilise and disrupt for a better tomorrow. 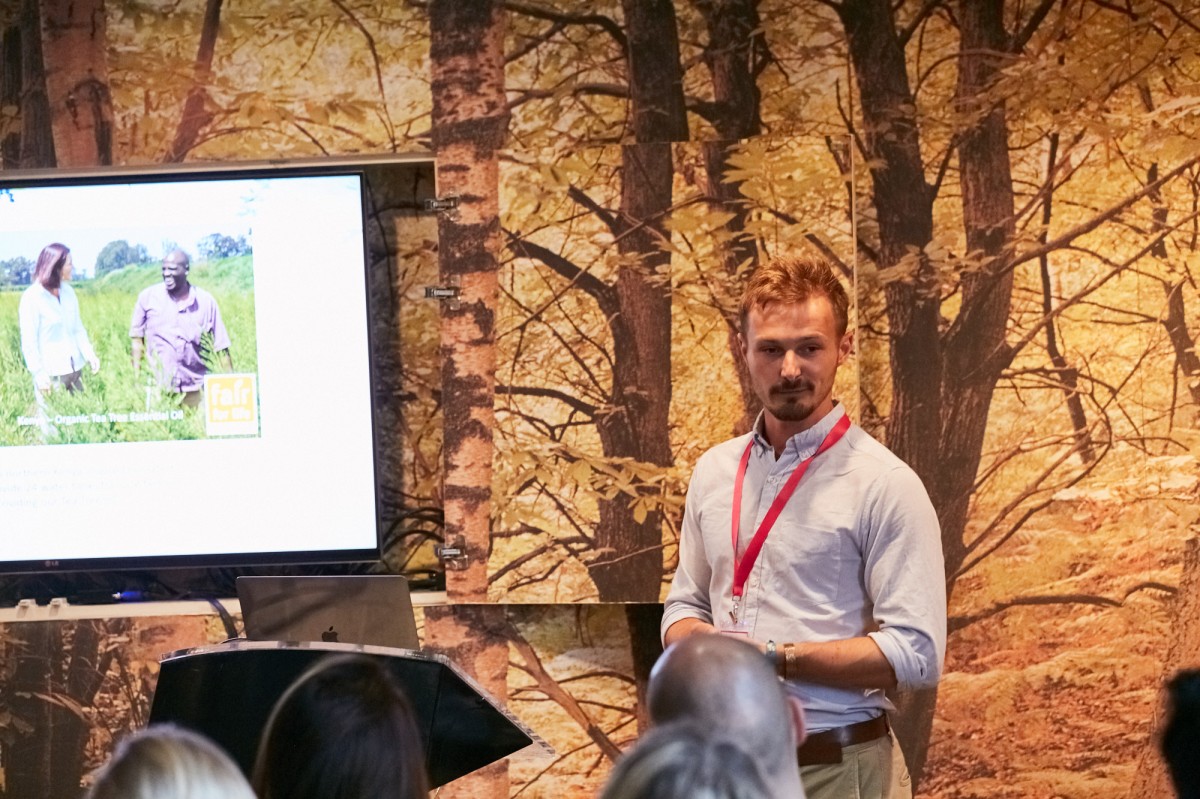 Dom meandered into the world of ethical beauty through a stint in the military, a degree in engineering, a placement with Engineers Without Borders and an engineer at Neal’s Yard Remedies. Neal’s Yard Remedies is where we find him now in his position as project manager, a role overseeing supply chain, sustainability and campaigns.

Founded in 1981, Neal’s Yard Remedies is a family-owned organic business that started out with a focus on therapeutic herbs. In 2002 they were the first non-food brand to have soil association accreditation. In 2005 they moved to their eco premises and now have 53 stores in 23 countries and 20,000 home-selling consultants in the UK and US. It’s fair to say Neal’s Yard Remedies is a brand that’s made it big while remaining true to its values.

Supply Chain
The Neal’s Yard Remedies supply chain is where they started getting serious about sustainability and pioneering organic for the non-food industry. Inspiring consumers to change and take responsibility is part of Dom’s challenge – communicating the benefits of not only organic ingredients but also provenance and agriculture.

It’s Dom’s job to keep things simple for Neal’s Yard Remedies customers who want to make good choices. Cosmetics are an example of the testament to the dedication to their values and customers; though they are Fairtrade certified, with so many ingredients needed to keep cosmetics effective and so many elements to ensure are certified, Neal’s Yard Remedies keep their cosmetic range modest until they can be sure of every single step of the process.

Reporting is a huge part of operational sustainability. Until very recently, Neal’s Yard Remedies was an SME and gained organic certification relatively easily. But as they grow, a more systematic approach is necessary. For bigger businesses, it’s about finding the balance between what’s achievable and what’s best for the environment. Dom’s attitude is to take it slow and tackle each new challenge logically, while continually reviewing how to do better.

Bee Lovely: The Bee Lovely campaign focused efforts on saving Britain’s bees, an issue many are now taking note of. In order to affect change through consumerism, Neal’s Yard Remedies have an associated range, highlighting the plight of the bumblebee as a significant issue.

Microbeads: With their #BanTheBead campaign, Neal’s Yard Remedies worked to convince consumers to check packaging and raise awareness. Dom talked about collaboration being the most effective way of reaching the best solution and for this campaign they worked with the charities that gave them the greatest credibility and weight to affect legislation.

Simplicity, collaboration and perseverance – Dom’s keys to success. Neal’s Yard Remedies grow every year while retaining their integrity and influencing change, so who are we to argue?!

A Force to be Reckoned With.
Jarvis Smith, MyGreenPod, P.E.A Awards 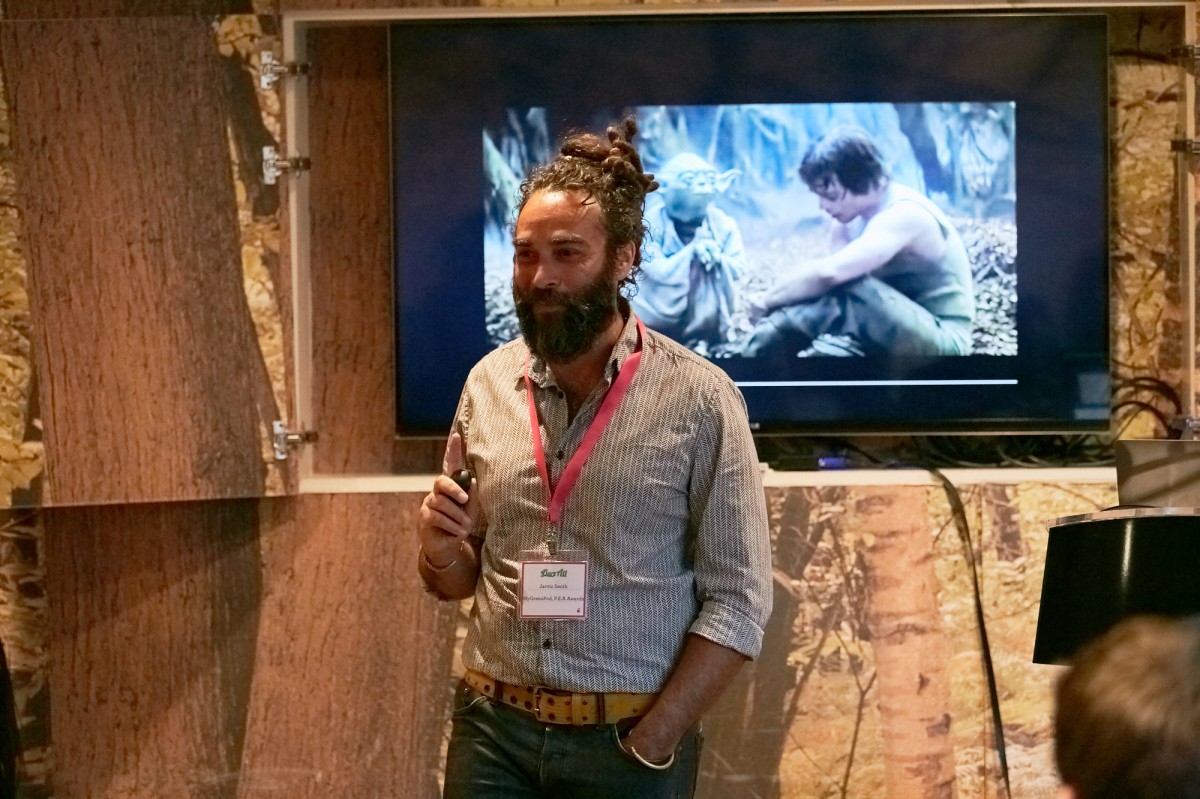 After a group meditation to get us in a place of calm contemplation, Jarvis Smith shared raw and honest personal experiences of his childhood. Flashing up a screen shot from Star Wars and the moment Yoda explains to Luke about the power within himself, Jarvis explained how his 7-year-old self connected with the idea of ‘the force’ and knew he was able to use it.

Jarvis channels his creativity through many means, one in particular being songwriting. He used to tell people he felt connected to the same energy that helped Bob Marley write his songs, a statement that earned him looks of incredulity. However, the day after he left The Wailers, Julian Jr Marvin turned up on the doorstep of Jarvis’ studio and together they wrote The Phoenix Rose.

Jarvis was invited, with his shaman, to raise some money on a TV show. Jarvis sang and the shaman chanted – and they asked for £70k. They were laughed at. Jarvis compares it to being thrown to the lions; it bruised his ego and went through a healing process to make his peace. However the universe once again came to his assistance as the researchers on the show (who had loved his vibe) asked him to appear on the TV show, Dumped.

Dumped was a reality TV show highlighting the dark side of consumerism. Contestants survived on a landfill site for three weeks, building shelters, places to eat, sleep, the lot. What was everyone else’s waste was their gold. The producers were hoping for Big Brother-esque drama but the contestants instead made a commitment to empower each other and use the show as an opportunity to encourage people to recycle.

The pinnacle moment came when Jarvis and a fellow contestant fell ill 20 minutes after a truckload of fresh rubbish was dumped on the site. Jarvis felt toxic, sick within and at once understood the impact of consumerism, greed and waste on the planet. He realised then that he would dedicate his whole life and business to encourage people to live more sustainably.

National Geographic
Jarvis went to National Geographic with an idea for a publication and together they co-branded the magazine, Green and made history – never before had a British, editorial-led National Geographic product been started in the UK. The success of this project is solely down to Jarvis’ drive and desire to change the world, to make a difference.

Jarvis decided to stay in media because, as before, he knew media can be a ‘force’ for good. The damage being done, the position we’re in now, what we’re doing to the environment, it’s big news, it should be front page. But it isn’t. Eventually the partnership with National Geographic was left behind, as Jarvis couldn’t get the subscription service he needed to mobilise people for change.

P.E.A
On the back of leaving National Geographic and setting up with the Guardian, Jarvis decided in 2009 to set up the P.E.A (People, Environment, Achievement) awards, the only awards honouring individuals and teams, not those with the biggest marketing budgets. Once again he was disrupting the status quo and now P.E.A is the largest sustainability awards.

MyGreenPod
Jarvis’ life now is running MyGreenPod, a quarterly publication going out with the Guardian. Every issue is a revolution, never waivering from their ethics: they’ve never worked with a company that isn’t sustainable, ethical or UK-based. Once again he’s turning the media completely on its head.

‘We can all see the bullshit because of the fake news that’s going on right now, we know it’s utter nonsense’ says Jarvis, but MyGreenPod addresses that, getting the real stories before others and being totally transparent, honest and clear. He’s already told BP to eff off. He’s a bit of a hero in our eyes.

Jarvis ended by asking the question of us all – what does success look like? Does it look like a frazzled earth and the extinction of a human race obsessed with shopping, or can we take up a space more spiritual? 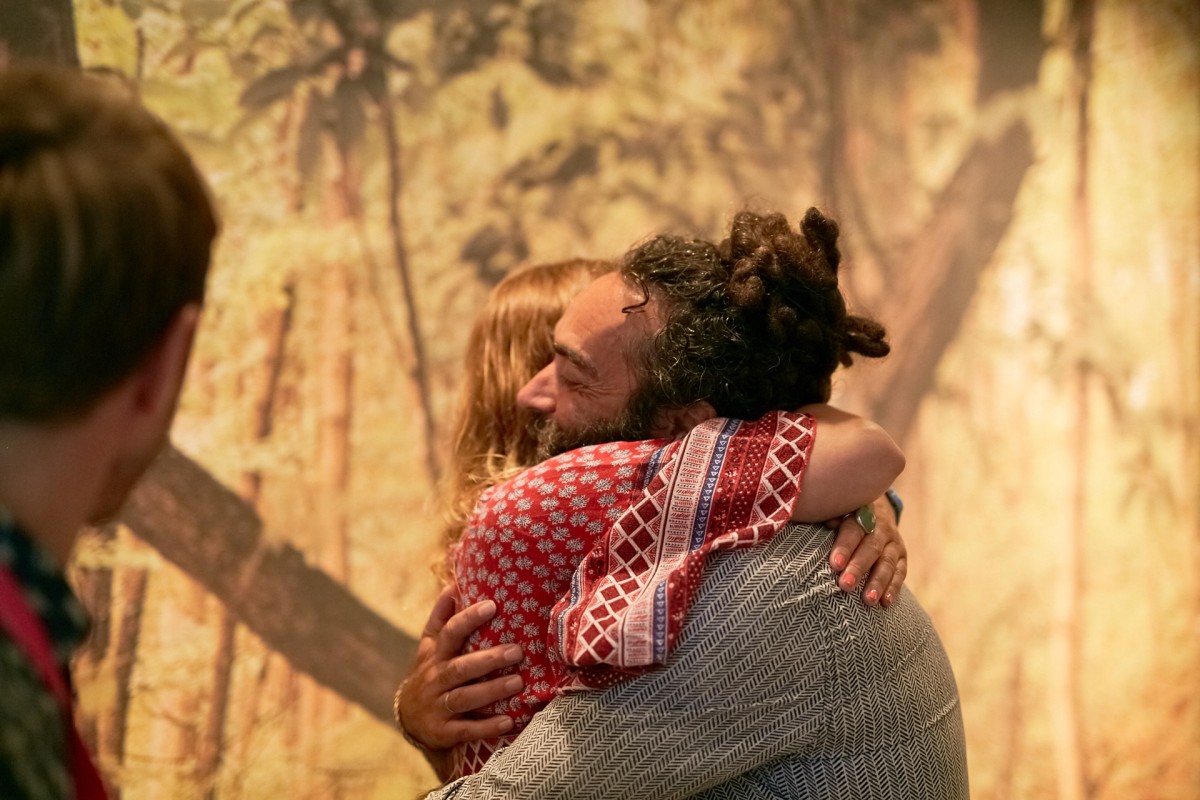